There’s a scene in the cable TV drama Mad Men where a woman asks her father about his drive up to see them. He responds with one of the best finger-snaps we’ve ever seen: “In the Lincoln? *snaps fingers* Like that!”

Pow! Such gravitas! It’s an action both aggressive and illustrative. The crack of finger against bone rips through the air so fast that you instantly get the point.

The moment also demonstrates how younger people see Lincoln, for we must confess to you, reader, that as writers of Leith Lincoln’s blog, we’re of a younger generation, more iPhone than Ike, more Facebook than Fitzgerald, more Netflix than Nat King Cole. A Lincoln makes perfect sense on a show like Mad Men, a nostalgic look at mid-to-late 20th century America, right along with men who wore suits and hats to the office.

But a Lincoln to a young person now? In our own garages? Hauling free-trade coffee and a new pestle and mortar to grind out gluten-free grains? This is a new concept.

Let’s look at where we are first, and then the car we’re here to drive. 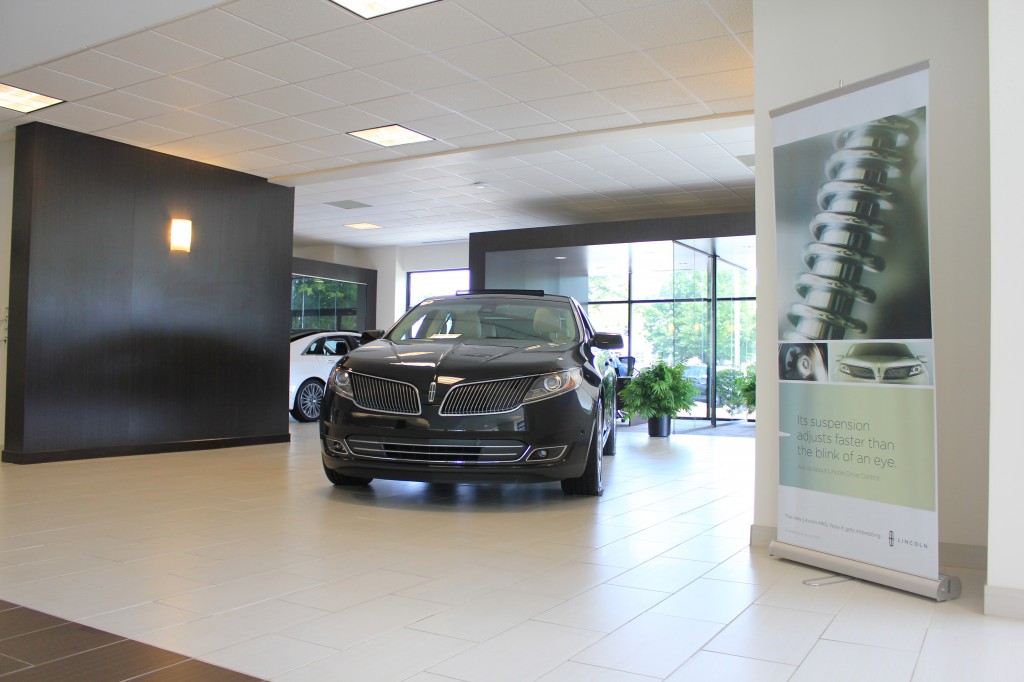 You might not know this, but Leith Lincoln is actually the very first of our dealerships, founded in 1969, same year as the moon landing. Since it’s where we got our start, we’ve renovated it regularly so that it always appears sharp and with the times. There’s lots of natural sunlight through oversized-panes of glass walls, and spacious open areas to walk around in, particularly the waiting area.

It’s a nice place, and doesn’t have the hushed-library feel that some buildings do. A building isn’t too interesting, however, unless you have people inside it, and in this respect we’re lucky to know Master Certified Sales Consultant Carl Banks, Jr. Carl took us on our test drive review of the MKZ earlier this year, and it’s a pleasure to learn about a vehicle with him. His easy manner and self-assuredness go a long way toward making driving fun.

This is our third drive with him of the morning (we also did the MKT and MKX), but a funny thing happened as were getting ready to take the 2014 Lincoln MKS out. A customer appeared specifically for Carl, which meant that he would be unavailable to us, indefinitely. Because Carl’s an easy-rolling guy, however, and because we’d just done two test drives on the same route around North Raleigh, Carl handed us the keys and told us to have fun. 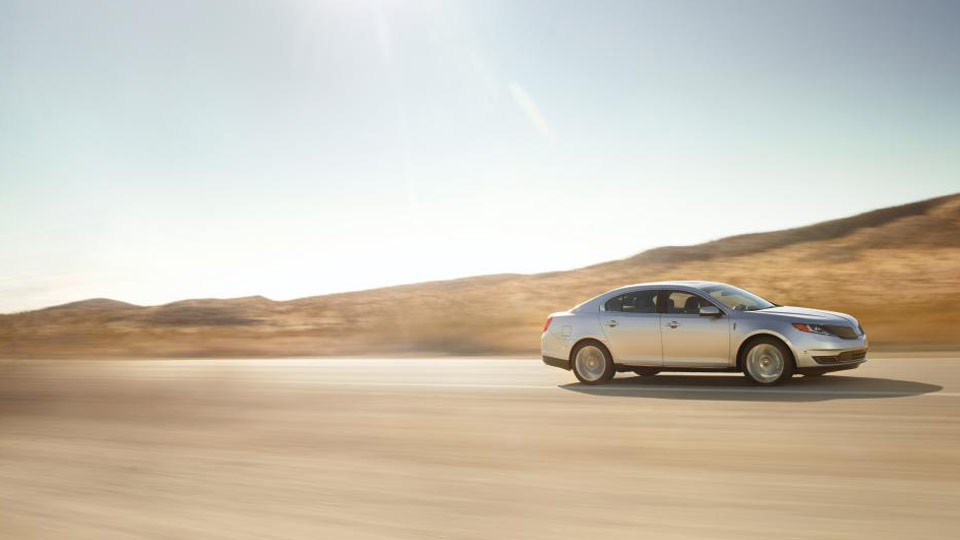 Eureka! Test-driving a brand new car is always a fun experience: the car smells new, everything is spotless, the engine is straight out of the factory, the tires aren’t faded or stained, the brakes have tons of grip, and psychologically you know that few people have done what you’re doing, so you feel like a bit of an explorer.

To do all that on your own is even cooler. Doing a test drive unchaperoned is like being a kid when your parents leave for the weekend. With the MKS’s fob in our hand, we head out into the lot. 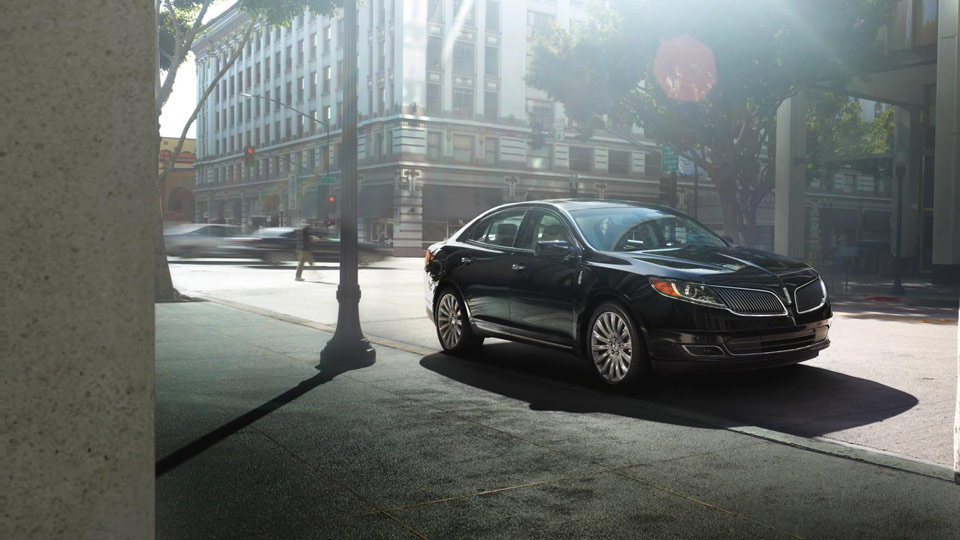 A fob is basically the key without the key. It’s the dark piece that has the lock/unlock buttons on it, but most cars nowadays have removed the metal key from the plastic base, opting instead for a sensor that lets the car know you have the fob. The range on these things is pretty good—250 feet by some estimations—and remote start is a standard function. We click the button and the MKS’s 3.7-liter V6 rasps to life. Very cool.

Many people are familiar with the concept of luxury cars—that they’re basically fancy rides with lots of cool features designed to make you comfortable—but when you hear the phrase “an American luxury car,” it takes some getting used to. American? America is synonymous with quality, forthrightness, directness, courage, boldness, etc. An American take on luxury isn’t a connection that immediately leaps to mind, which is a challenge for Lincoln. 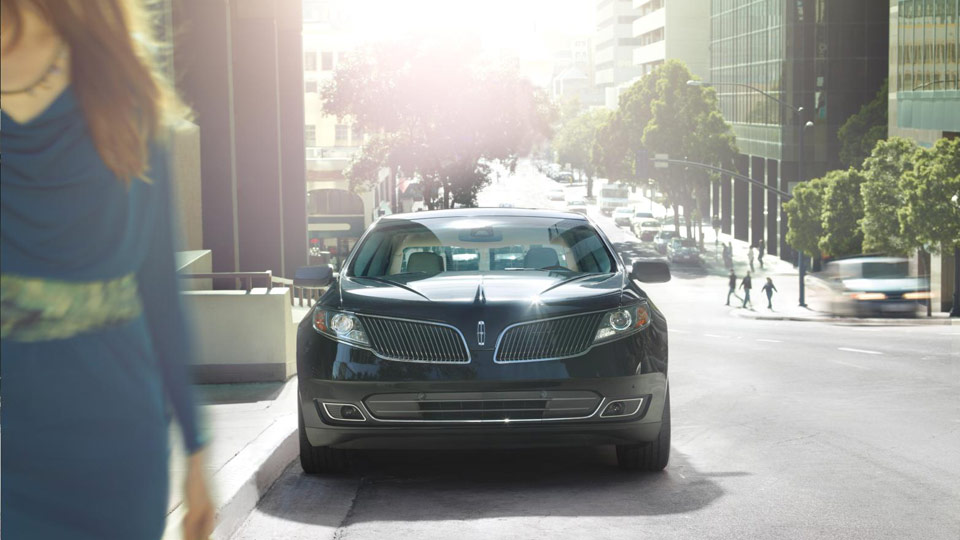 The MKS is a four-door sedan. Ours is black, with twin-diving vents in the front grille. As a luxury car, there’s little in the exterior design that calls attention to itself. Trying to grab attention, after all, is what you do when you’re trying to make it, not when you’ve arrived.

Opening the doors of our already-running vehicle, we try out the front and back seats. The black leather has a give to its cushiness that’s a pleasant contrast to the overly-firm seats that occupy some luxury vehicles. There are all sorts of seat adjusters, of course, but the initial impression of plush cushiness is what you want to feel right off the bat in a luxury car, so kudos to Lincoln for starting with that. 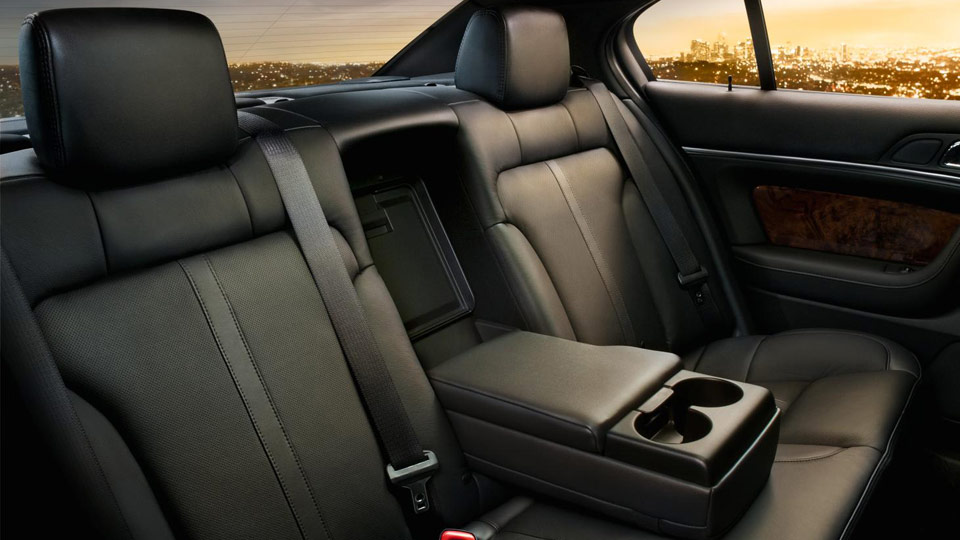 Sitting in the backseat also gives us a chance to appreciate the legroom, heated seat and climate controls, and separate sunroof just for us. The front-seaters get their own sunroof, but it’s nice to see that we don’t share a smaller piece of glass pulling double-duty. 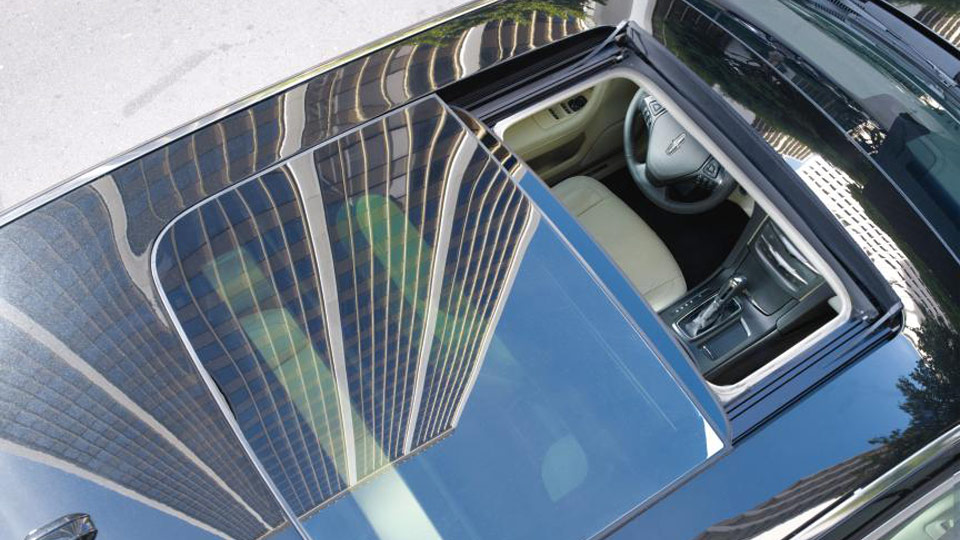 The doors slam shut with a reassuring “whuff” that reminds us of the seal that forms when canning jars. It suggests an airtight barrier, and excludes outside noise quite well. We check mirrors and click seat belts into place. We are ready.

As we roll onto the street and head toward Oak Forest Drive, we notice how much we like the dual LCD screens in the instrument panel. Plenty of automakers have some sort of digital screen in the instrument panel these days, but everyone’s trying to find the right mix of fun and function. The MKS uses a large physical speedometer in the center, along with the gear selected. 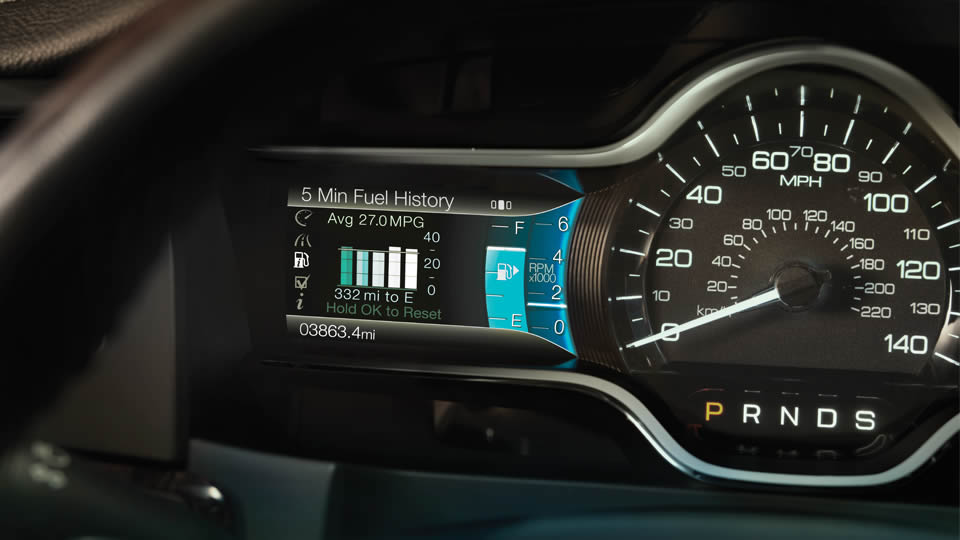 The two narrower LC screens flow out on the sides like the propellers of an airplane. The left screen—which glows blue—gives you data about the car: fuel, RPMs, MPG, miles travelled, and all the other stats that pertain to driving. Rather than let the instruments dominate the panel as they have for the past 70 years, they’re discreetly clustered in an easy-to-read band that lets you see as much or little as you like.

The right screen glows purple, and lets you do the fun stuff: entertainment, phone, navigation and climate. With easy steering wheel controls, you can switch between data and phone calls, navigation and fuel efficiency stats, with one or two touches. Because it’s LCD, the colors are vibrant and the display is incredibly sharp and high-end looking. This is what you expect luxury to look like.

This is supported by a main eight-inch touchscreen on the center console, of course, which lets you swipe through all the traffic info, gas price comparisons, weather updates, and navigation maps that you would imagine.

What we appreciated more, however, were the integrated touch controls for climate and audio volume. These aren’t part of the touchscreen above, trapped in submenu upon submenu. They’re separate physical controls that let you find just the right balance of music volume or temperature by touch. It’s a clever way to use touch technology by integrating it into the physical button interface—the best of both worlds you might say—and like most good inventions it makes us wonder: “How has someone not already done something this simple?” 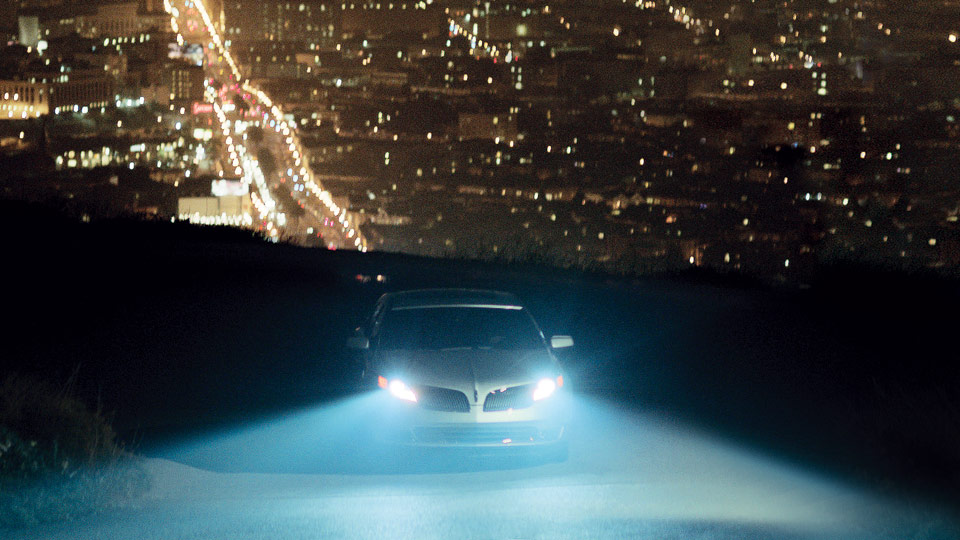 The MKS is a more than capable vehicle. With so many vehicles today electing to install modest turbocharged four-cylinder engines, it’s nice to have a sedan with an unapologetically large V6. We flow north from Oak Forest Drive to make our way toward I-540, facing stoplights here, changing lanes there, letting the MKS cycle through the various scenarios that we encounter every day.

A dump truck looms in the lane we’re turning into. A quick check over our left shoulder and prepare to slingshot around the brute gorilla, a momentum-killing eggplant that brings any driver to a no-fun 25 mph crawl. Faced with a tortoise-like situation like this, even patient passengers would begin to look out the rear window to let you know that, “You can pass if you like.” In the MKS, we’re not having any of this. Power is plentiful, handling is responsive, and there’s no way we’re spending any part of a brilliant Wednesday afternoon making traffic pile up behind a trash-hauler.

Similarly, as we approach the on-ramp to I-540, we hang back to let the white car ahead of us trundle along to the highway as if it had a dozen sheep packed on the inside. Normally we would disbelieve that a car could move that slow, but it might be that its driver was involved in a grass-blade counting operation. In any case, it gave us a moment to find the Michael Jackson station on the satellite radio. The 1980s/90s tunes of the King of the Pop are an appropriate halfway point between the Lincoln of old and the Lincoln of today, and we hoped that highway speeds would make the transition complete.

We floor it on the on-ramp. Normally that makes you think of a vrooming sound as the windows begin to streak past like raindrops in a wind tunnel. And that’s basically what happens here, too. We slow it down before merging onto the highway (safety first), than begin the asphalt-lacing toward the Six Forks exit like we’re Eli Whitney and I-540 is our cotton gin.

To be honest, at this point we were more focused on the road than recording our impressions, so there’s a bit of a memory gap here. We are pretty sure that we did not black out, however, as we returned the MKS to Leith Lincoln safe and sound without a scratch on it. We remember “Man in the Mirror” and “Don’t Stop ‘Til You Get Enough” but dimly, as the sun appears when you’re underwater. 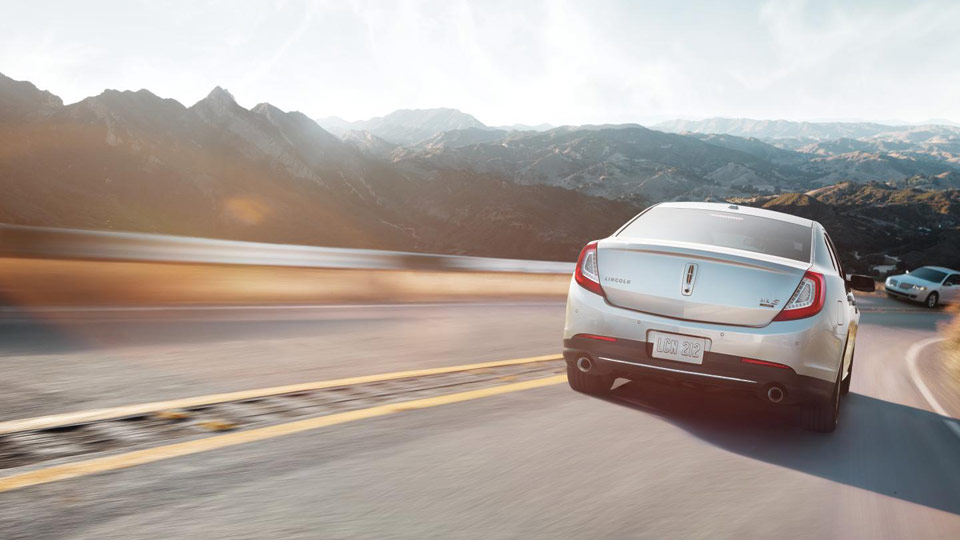 The 2014 Lincoln MKS was a thorough pleasure to drive. It impressed with its crisp LCD high-resolution screens, confident physical controls, exceptionally comfortable seating—even for a luxury car—and brute force-styled engine. We wonder what kind of a reference the cool shows of the 2060s and 70s will make about Lincolns of today, but if we had to guess, it won’t be the father snapping his fingers then. It will be the daughter.

Behind the Wheel of the 2014 Lincoln MKS was last modified: December 18th, 2015 by Leith Lincoln