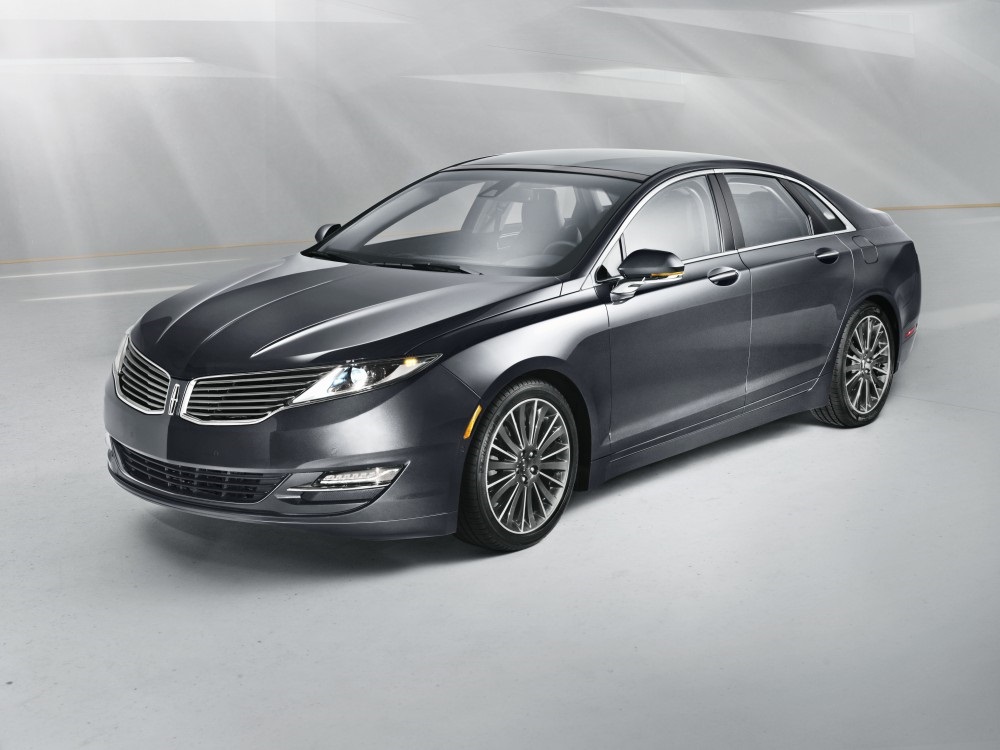 We’ve been a little bit quiet lately, but that’s because we were working on something special. For what we hope will be the first of many times, we got behind the wheel of one of our vehicles and took it for the full Leith test-drive experience. Last Friday, we had the opportunity to test out the 2014 Lincoln MKZ.

When we arrived, we were greeted by one of our sales consultants, Carl Banks. He offered us access to the lounge and coffee bar while we waited – he had the cars warming up out back. You’ll notice that “cars” is plural. After he found out we were coming, Carl decided that if we wanted to test-drive the MKZ, we’d better get the feel for all three of its powertrain options. That shows you how thoughtful our sales consultants are, but that’s only the beginning for Carl.

Carl has been with Leith Lincoln for eight years. He graduated from Syracuse University in New York, where he was enrolled in the Army ROTC program. He went on to serve in the US Army Signal Corps, serving several tours of duty in Germany, Somalia, and elsewhere. After his service ended, Carl spent time in the telecoms industry before joining the Leith family. Now, he is a Lincoln Brand Champion, and he says his background has attuned him to the rapid progression of technology in all fields. In other words, Carl is the perfect person to tell you about the advanced systems onboard any Lincoln vehicle.

Our three lap circuit began with the 2.0L Atkinson-Cycle I-4 Hybrid engine. Carl popped the hood and let us look at one half of the power supply, and then he popped the trunk so we could see the other half. The hybrid’s batteries call for a marginal sacrifice in trunk space, but the 2014 update situates them parallel to the floor, so the rear seats are able to fold down. If you’re deciding between the Hybrid and the 2.0L GTDI I-4 EcoBoost engines, that’s the only aesthetic difference between the two – the hybrid and the EcoBoost not only look the same, they cost the same.

We sat down in the driver’s seat, and Carl gave us a moment to adjust our mirrors, position the seat however we wanted, and otherwise get comfortable. On a brisk morning like this one, we were glad he had taken the time to warm up the car. Normally, Carl likes to find out what you set your car thermostat to, and even your favorite radio station, so he can preset the car to an atmosphere that you’re used to. When we were ready, he asked us to put our foot on the brake and press the ignition button. A green indicator light flashed on the dashboard, but the car didn’t make a sound. “Ok, it’s on,” said Carl. Just like that.

He walked us through the displays on the instrument cluster. In the Hybrid MKZ, the left display features MyLincolnTouch, which contains diagnostic data about the car, trip information, controls for various advanced safety systems, and real time telemetry for the hybrid system. It’s possible to bring up MyLincolnTouch on the center console display as well, so you can see exactly where the MKZ is currently drawing its power from. The right display on the instrument cluster shows you information related to entertainment, navigation, and climate controls. Both displays are controlled via thumb buttons on the steering wheel.

Carl was exceptionally thorough, fully explaining all the features at our fingertips, but he could tell we were anxious to get rolling. Normally, he’ll drive the car off the lot and pull into a shopping center less than a mile down Capital Boulevard to let the test-driver take the reigns – which also gives him a chance to show off the MKZ’s rear view camera and Active Park Assist technology – but he made an exception for us, letting us pull away straight from the dealership.

The Hybrid drivetrain is smooth, so very smooth. You don’t even feel it when the engine kicks in. The only indication is the EV indicator on the dash flashing on and off as you switch between electric and gas. Under the right conditions, the MKZ can cruise on electric power at speeds above 70 miles-per-hour.

As Carl explained, the MKZ is a car that takes some adjusting to, particularly if you haven’t driven a Lincoln previously. For example, the MKZ’s brakes are much better than what we’re used to driving, and the Hybrid model features a Brake Coach that pops up on the MyLincolnTouch display and grades your braking technique on a one hundred point scale. Our top score was an 83, which isn’t too bad if you used to get low B’s on tests. Given some extra practice, we like to imagine our average score would increase steadily as we take more of those red light pop quizzes.

Our test-drive course took us through the neighborhood and onto the highway before circling back to the dealership, so we saw the full range of the MKZ’s capabilities with each powertrain. Once we finished our lap with the Hybrid, we switched over to the EcoBoost 4-cylinder.

Carl referred to this one as the “Date Night” car, a suitable title as it looked rather dashing in its Tuxedo Black paint. While we were driving down Capital, he flipped the switch to open the panoramic sunroof. When it’s down, the MKZ might as well be a four door convertible. You can look up – not while you’re driving – and see nothing but blue sky above you. As another point of adjustment, when the sunroof is back, the rear windshield is partially covered, though not enough to obstruct your view in the mirror. At higher speeds, if you have the roof open, it will close partially to let you see more of the road behind you.

The roof is one of many bold design features in the MKZ. We admired the clean center console, the way the push-button gear shift creates more space for the driver and the passenger, and the reach-through storage space between the seats. Carl said that as a sales rep, he and his colleagues revere the craftsmen and engineers at Lincoln for these sorts of design choices, and reverence is exactly the feeling you get looking at the MKZ. From the split-wing grille to the soaring silhouette, it’s a clear representation of Lincoln’s artful vision for the automobile.

By the time we finished the second lap, we were ready for the V-6. As performance stacks up, the Hybrid MKZ nets 188 horsepower from its powertrain, while the EcoBoost I-4 draws on 240 horsepower, so if you’re trying to decide between those two, that may be the difference maker. If you’re looking for high performance, and you want a car that “has guts,” as Carl would say, then you should pay attention. The 3.7L TI-VCT V-6 gives you 300 horsepower to work with, and we certainly went to work.

With our foot barely depressing the accelerator, the V-6 MKZ shot out of the parking lot. There’s an eagerness to the engine, one that makes it difficult to ease off the throttle. During the whole neighborhood portion of the driving course, it felt as though it wanted to cut loose and take over the road, and once we got to the highway, there was no more reason to hold back.

If anything was in our way, we passed it, rushing by cars in a blink, and zooming past the length of tractor trailers. The V-6 is responsive, surging forward in an instant, and it’s loud, too. As quiet as the cabin of a Lincoln is thanks to active noise cancellation, it couldn’t hush the roar of those six cylinders. It’s also worth mentioning how comfortable the steering wheel itself is. Not only is there an option for a heated steering wheel, but it’s leather-wrapped and ergonomically crafted to fit your hands when driving. We had trouble letting go once our test-drive was over.

Reluctantly, we finished our power trip and parked back behind the dealership. It had been a bright, sunny day, so Carl was sure to mention the features of the MKZ that we didn’t get to see. Those were namely the automatic windshield wipers, which detect the intensity of the rainfall and match speed to keep up, and the adaptive LED headlights with automatic high beams. Also, we were (mostly) responsible on the road, so we didn’t trigger any of the MKZ’s advanced safety features, but Carl assured us they were present.

Our test drive concluded, Carl asked if we had any other questions. Smooth jazz had been playing softly over the THX surround sound speakers. We asked if those could make the big whooshing noise like they do in theaters. He smiled and said, “You’d be surprised how often people ask me that.” Then he reached over and slid his finger along one of the capacitive touch bars, turning the volume all the way up before going into the audio settings and selecting “THX Deep Note Sound Test.” We have to tell you, everything outside is quiet when you’re sitting in the MKZ, but you’ll feel those speakers in your chest cavity.

Overall, we thought our test-drive experience of the 2014 MKZ was exceptional. The car is beautiful and it performs as well as, if not better, than it looks. It may take some adjusting, but it doesn’t take long to get comfortable behind the wheel. Between the three different powertrains options, there is an MKZ that will satisfy anyone, whether you’re twenty-five, fifty-five, or eighty-five. Even more than the car, we were impressed by Carl Banks, our guide and Lincoln Brand Champion. Carl’s exceptional knowledge proved he was a true professional, but it was his honest, personable nature that really sold us.

We want to thank the folks at Leith Lincoln for giving us this chance, Carl Banks for guiding us through our experience, and you for reading. We hope we’ve inspired you to take a closer look at the 2014 Lincoln MKZ and schedule a test-drive for yourself. You can do so on our website, and if you have any more questions, don’t hesitate to leave a comment, send an email to comments@leithmail.com, or contact us at Leith Lincoln in Raleigh.

Behind the Wheel: The 2014 Lincoln MKZ was last modified: December 18th, 2015 by Leith Lincoln