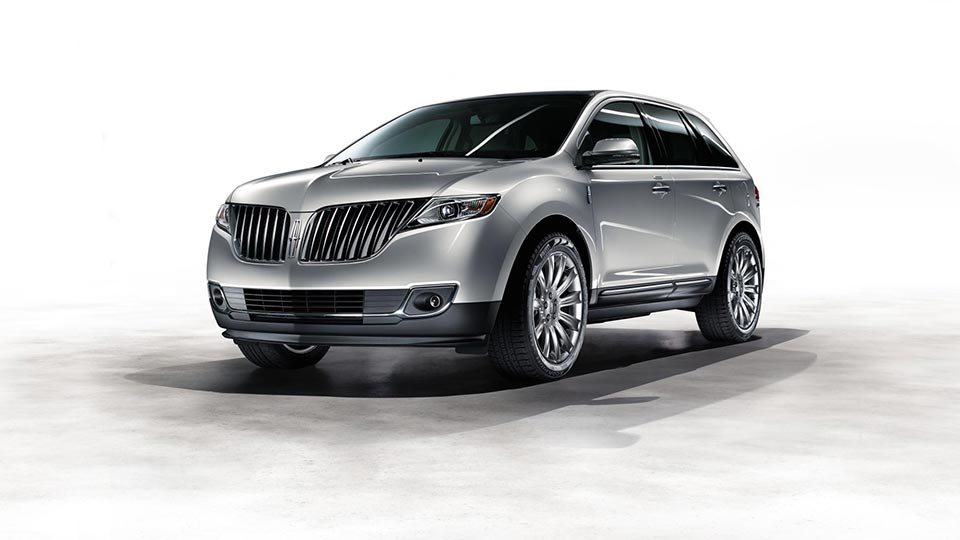 The 2014 Lincoln MKX still bears an earlier variation of the Split-Wing grille that has become a signature on all Lincoln models. It’s more square, and the chrome feathers are wider and more spread out, but it’s still the most striking feature of the car’s exterior design. We’ve recently looked at the new MKX Concept that has an updated grille, which makes sense for the first true update that the car has had in as many years as its been on the market. We like working with what we have at the moment, and what we have is a great car.

To explain all the features of the current MKX that make it great, we called on our friend, Carl Banks, Jr., to accompany us on a test-drive. We waited in the showroom long enough for Carl to find a key and then headed out onto the lot.

Speaking of striking features, any exterior description of this car should start with the wheels. With a wide stance, you can see that the MKX has a solid center of gravity and a steady grip on the road. This stability would only be accentuated if you opt for Lincoln’s Intelligent All-Wheel Drive system, which can actively redirect power to the wheels that need it most. Beyond that, there are five different wheel options, including 18-inch, 20-inch, and our favorite, the 22-inch polished aluminum.

Despite the gravitas established by the wheels and their accommodating wells, the MKX has a short overhang in the front and the back, reinforcing its status as a compact utility vehicle. The front windshield is massive, giving those within a wide field of view, especially on models that have a panoramic Vista Roof. Finally, the spoiler integrated into the car’s roofline betrays the car’s secret sporty nature. We’ll get to that later, though.

For now, Carl asked us to turn the car on. We were still standing outside the vehicle at that point, but with the key in hand we took advantage of the standard remote start, a feature that extends across the full Lincoln lineup (as of the unveiling of the 2015 Navigator). Carl explained that he encourages people to leave their climate control settings on automatic. That way, when you start your car from across the parking lot or inside your house, it will be at a comfortable temperature when you get to it. This feature even works with the heated and cooled seats.

The key also has a button that will open the trunk. The MKX has a standard automatic opening and closing rear liftgate, which reveals a spacious trunk. The second row seats will fold down automatically when two buttons in the trunk are pressed, but you’ll have to raise them back up manually next time you need the extra seating. A cargo net also comes with the vehicle so that you can secure whatever you’re putting back there. 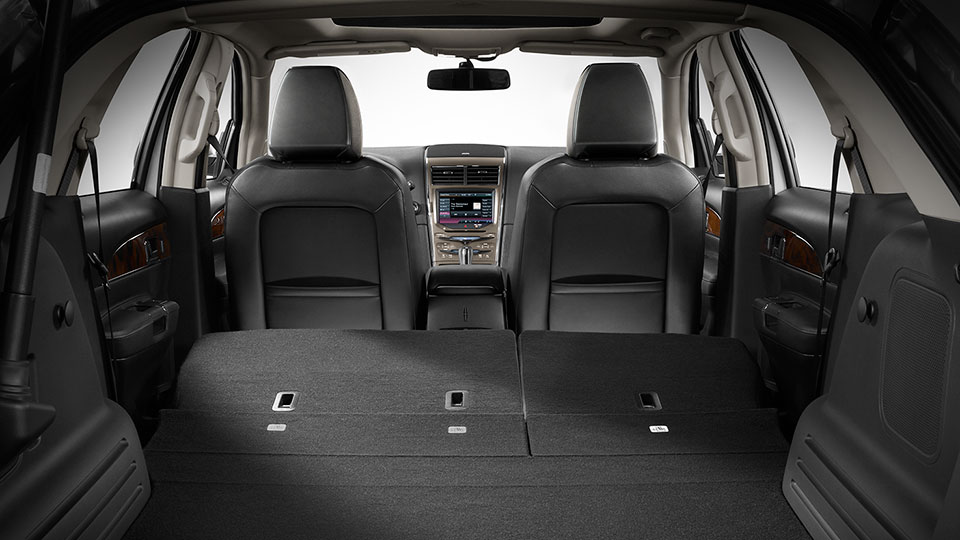 You’re probably asking yourselves the same question we asked Carl at this point: “What’s the range on the key?”

“I’m glad you asked that question,” said Carl. He told us that they don’t have an official number, but that a previous customer of his had estimated it was about two hundred and fifty feet. That’s the range he tells people anyway, but he’s not sure. Even so, that’s more than enough. The other great thing about the remote is that it you have to press twice on the button to get the car to start or the trunk to open. No worries about pocket-starting your Lincoln. 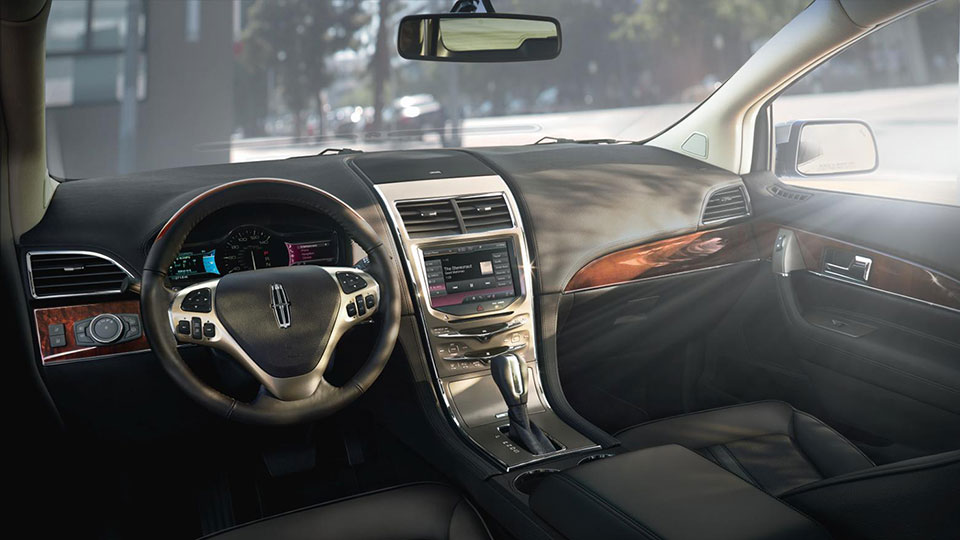 Carl is all about trust. That’s why he got in on the passenger side and started telling us about the interior while we adjusted our mirrors.

Leather seats come standard in the Lincoln MKX, though you can upgrade to the premium Bridge of Weir Leather if standard luxury isn’t to your taste. The perforated seats feel comfortable and as mentioned before have three-level heating and cooling depending on your seasonal needs. The wood trim is genuine, and in our MKX, it was a lustrous Olive Ash inserted into the door panels and dashboard. 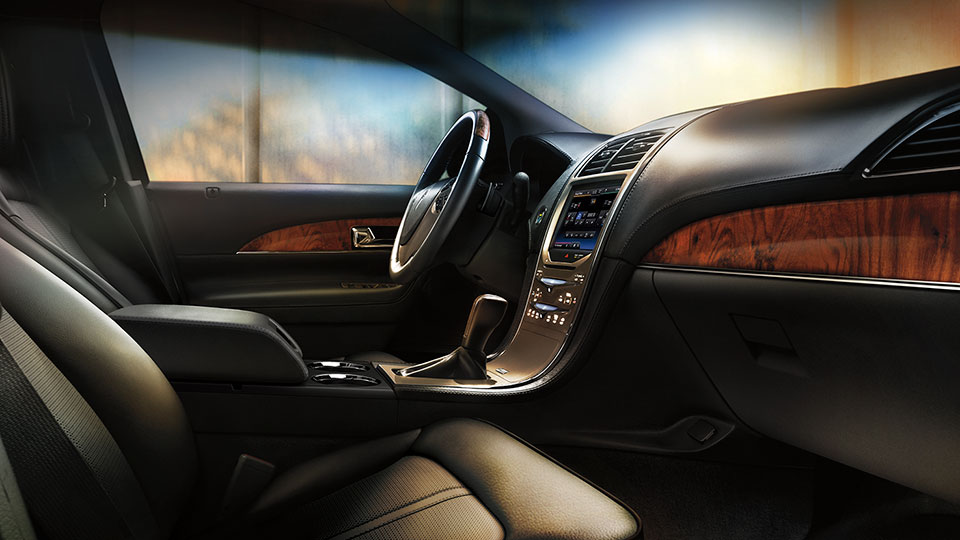 The dash itself is very clean. The shifter is the only thing that sticks out. Everything else is flush. This is where capacitive touch buttons pay off. The absence of physical buttons gives the climate and volume controls a less cluttered feeling, making the cabin more open and spacious as a result. 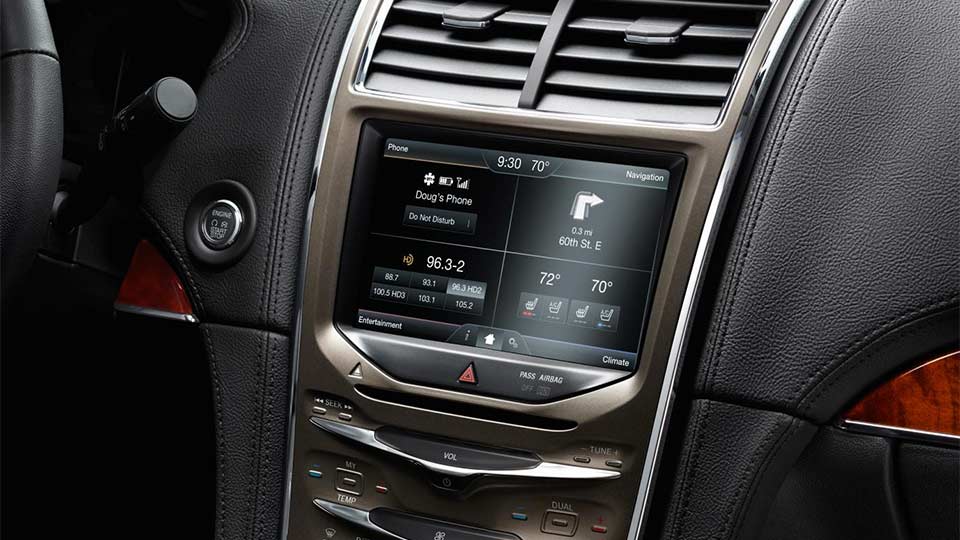 The display screen works via SYNC with MyLincoln Touch which means everything on screen is touchable and customizable. Need to readjust your clock for Daylight Saving? Just touch the time and change it. Change to twenty-four hour notation if that suits you. You can even change from miles to kilometers and Fahrenheit to Celsius. The freedom and the sheer variety of information that you have at your disposal can be overwhelming at first, but it’s something you’ll get very used to. Everything on screen can also be controlled with your voice. 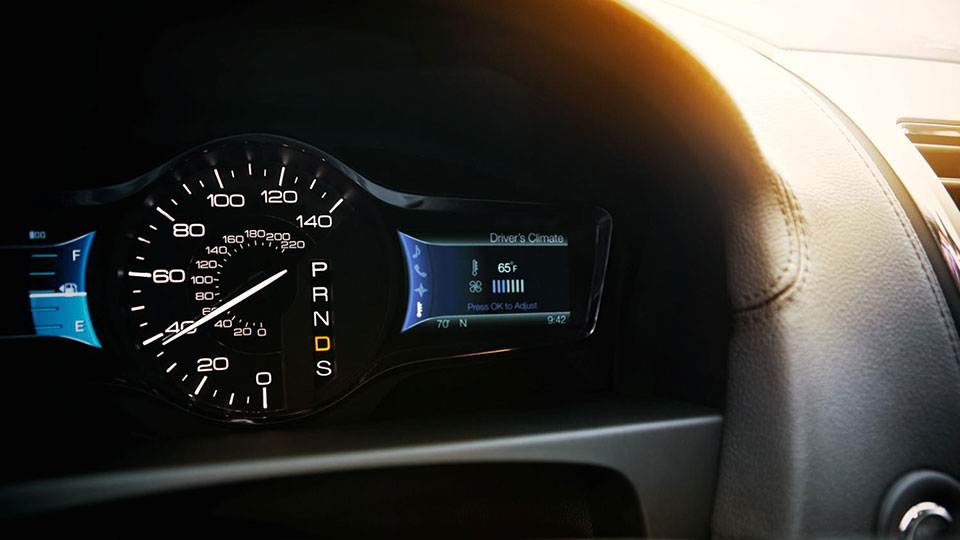 Shifting over to the instrument cluster, speed is displayed in the center. To the left is the Systems menu and to the right is the Entertainment menu, corresponding to directional pads on the steering wheel. With the Systems menu, you can check your fuel levels, trip-o-meter, and other diagnostic information, and with the Entertainment menu, you can change radio stations, display turn-by-turn directions, and more, all without taking your hands off the steering wheel. 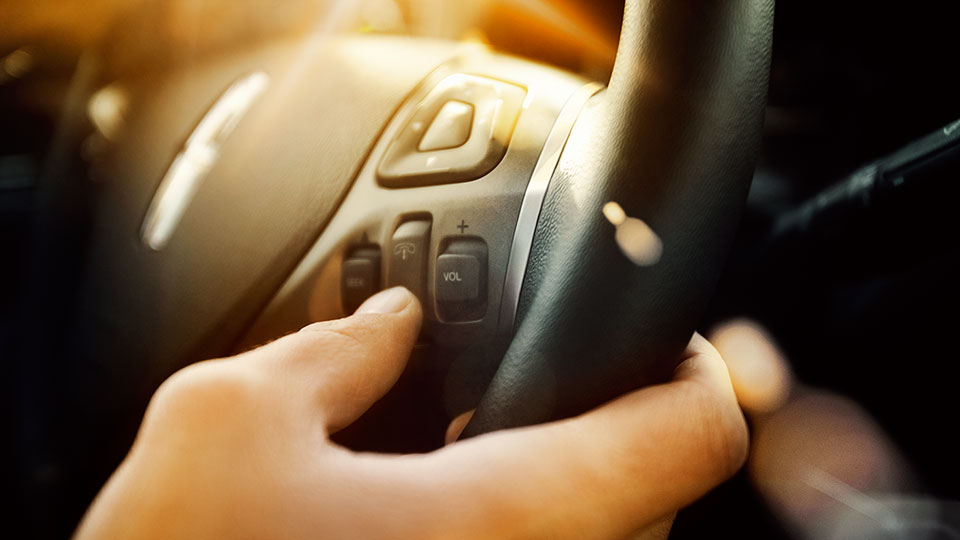 We haven’t even touched on Travel Link yet. Integrated into the Navigation package, Travel Link gives you every kind of information you could ever want on the road. You can bring up a weather forecast if you need to, not just for where you are, but also for where you’re going, as well as every stop between. You can locate points of interest, and the system will warn you of traffic events such as construction or accidents. There’s an option to display the closest restaurants if you’re hungry, and even a feature that lists nearby gas stations in order of the cheapest prices. Travel Link is free for the first six months you own your Lincoln, along with Sirius satellite radio, and that’s more than enough time to get you hooked on it.

Then of course, there is the THX II Certified Audio System, a 650-watt, 13-channel, 14-speaker system that will make you feel like you’re sitting down in a movie theater or a concert hall. You already know if you read our MKZ review that you can do the THX Deep Note sound test, just in case you have doubts about what you’re listening to. We got Carl to do the sound test again because it just never gets old. 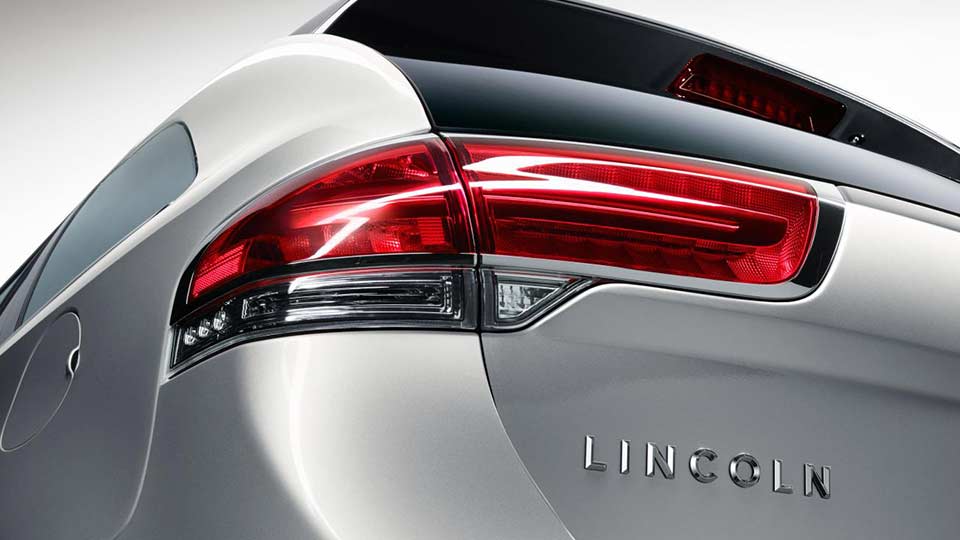 While Carl explained everything, we weren’t sitting there in the parking lot. We knew the test-route, and we were off.

The MKX is powered by a 3.7-liter V6 engine, which we also recognized from the high-performance variant of the MKZ we drove back in January. We didn’t have to look under the hood to realize it was the same. All we had to do was step on the gas.

This car has guts, too, and it’s surprising in a way. You don’t get into most crossovers expecting to own the road, but the MKX challenges that preconception. We had to wait until we got to the highway to really let loose, but even driving through the neighborhood, we could sense something more energetic in the way it handles curves. It didn’t help that the car in front of us was driving much too slowly for our tastes.

Once we got to 540, there was no holding back. The engine delivers 305 horsepower and 280 foot-pounds of torque, so from the moment we hit the ramp, we were pushing it. To its immense credit, the MKX never feels like it’s being pushed. Anything you want to do, it will do, especially if what you want to do is pass the herds of 18-wheelers roaming the beltline at midday. We shifted all the way over to the left lane and cruised by, remaining there until we had to turn around at the Six Forks loop.

Carl has the best laugh, by the way. We heard it plenty during that drive as we were carving up the road, gunning it back toward the dealership. The MKX also has a great exhaust note, one of the best we’ve heard in a CUV. Again, it’s a satisfying tone that never sounds strained. As Carl will say, “Just because [Lincoln] is domestic, doesn’t mean we’re inferior.” He says it with pride, the kind that comes with more than eight years of experience with a brand.

It goes without saying that the MKX is a smooth ride, thanks to Lincoln’s four-wheel independent suspension system. That along with their superior acoustic technology makes it a quiet ride, too. Braking is smooth, acceleration is prompt, and fuel economy is competitive for the top of the class. In short: the MKX rules. 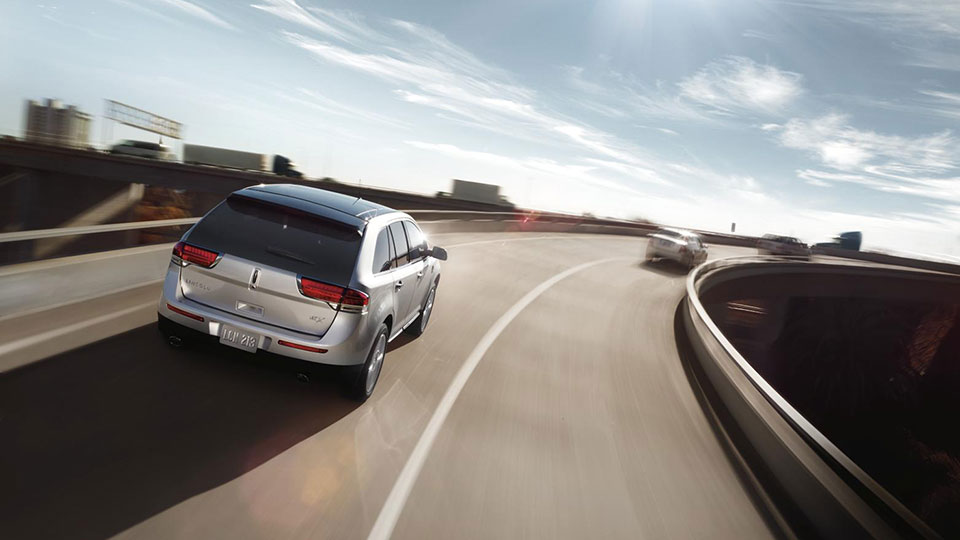 It’s Carl’s humble opinion that when you drive a Lincoln automobile, you’re getting more bang for your buck.

Sitting behind the wheel of the 2014 Lincoln MKX, you’ll have every feature at your fingertips that you would expect to have in a luxury vehicle. What you won’t expect to have, perhaps based on how it looks or what you think of the crossover class, is a car that is genuinely fun to drive. The V6 engine gives it all the power you could want, and Lincoln’s engineering provides a firm footing, making the MKX nimble for all its apparent bulk. Based on the fun factor combined with the fuel economy, we agree with Carl’s assessment.

We have to thank Carl Banks, Jr. and Leith Lincoln for the test-drive experience. If you’re interested in test-driving the 2014 Lincoln MKX, feel free to call and schedule an appointment.

Behind the Wheel of the 2014 Lincoln MKX was last modified: December 18th, 2015 by Leith Lincoln