Hello again. If you’ve been following our series on the 2015 Lincoln MKC, you know that it is the first Lincoln designed and engineered by a dedicated development team. To create this vehicle, they hewed to a three-pillared approach, and for our coverage we decided to focus on each of those three pillars in turn. They are:

We welcome you to read through those posts if you haven’t already so you can be better acquainted with the looks and features of the MKC. Right here, right now, we’re just going to talk about driving it. 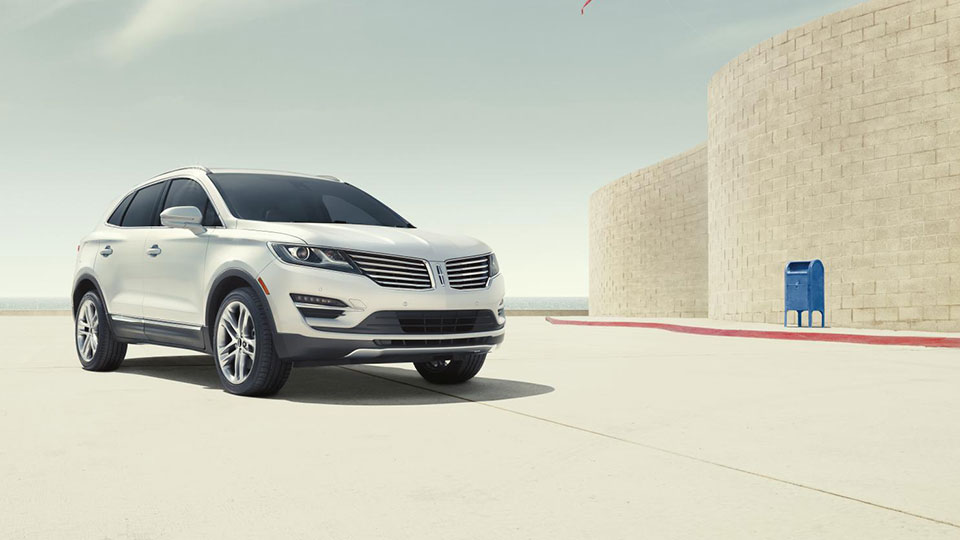 Carl Banks sounded very excited in his email. Having stuck with us through all of our other test-drives, it was only fitting that he get to show off Lincoln’s new model to us as well. We had been waiting several weeks to hear from him when Leith Lincoln got their first 2.3L EcoBoost MKC in stock, and now that he finally had one, he wanted to make sure we could drive it before it got nabbed by someone else. When we got to the dealership, it was sitting there, right out front, resplendent in its Platinum White paint and freshly detailed. It shone from one end to the other and from the decorative chrome roof rails down to the optional nineteen-inch wheels. 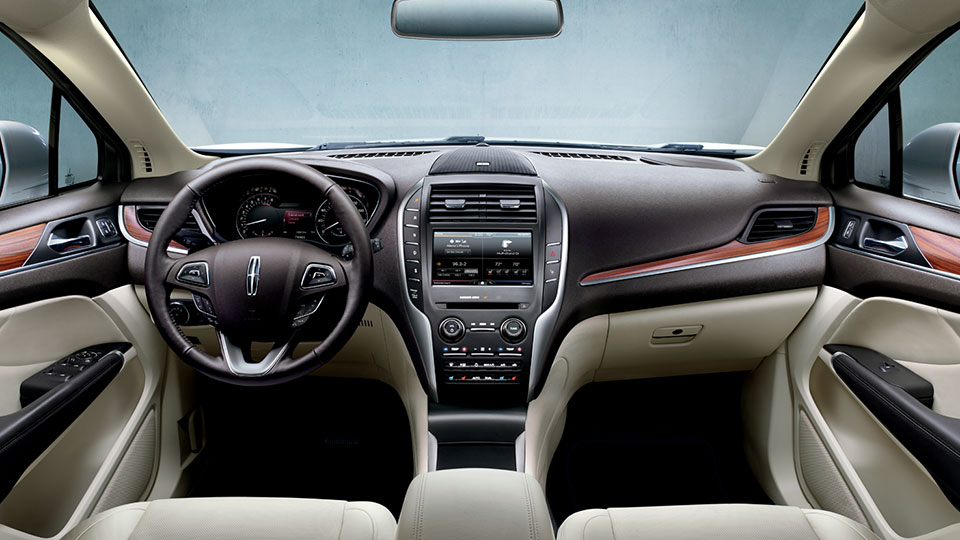 The car we would be driving was the Reserve trim level, fully loaded with basically everything except for the THX sound system. Inside, it had the two-tone Espresso and White Sands Bridge of Weir leather and the Santos Rosewood appliqués. Were we purchasing an MKC for ourselves, we would probably pick a different exterior color, and THX speakers would be a must, but otherwise this would be what we wanted. It was perfect for a test-drive, though, and that’s because of what was under the hood.

The 2.3L EcoBoost engine in the MKC is a variation of the engine that will power the 2015 Ford Mustang. In the Lincoln, it has an east-to-west orientation and makes 285 horsepower. The engine also produces 305 pound-feet of torque, and a six-speed automatic transmission rounds out the powertrain equation. The 2.3L engine is exclusive to all-wheel drive models.

We got the numbers out of the way, and Carl knew that we were already acquainted with the MKC having been through the training, so we were ready to hit the road and see what she could do. Except first we had to stop at the gas station. It turns out we weren’t the first ones to go for a test-drive joy-ride in this particular car.

Stopping at the filling station just up the street, we did remember one of the other great personal services the Lincoln engineers have done for the customer. Not only does the MKC have competitive fuel economy: it’s the only car among its would-be rivals that takes regular unleaded gasoline. 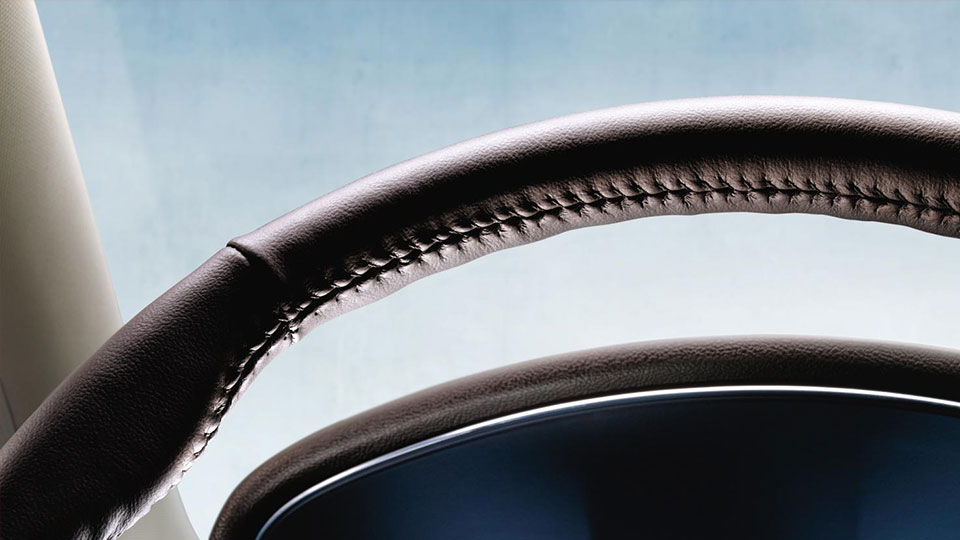 While driving the neighborhood portion of our usual test-route, we came to appreciate the steering wheel, a piece that Lincoln is exceptionally proud of. It’s just the right thickness, and the Wollsdorf leather wrapping is wonderful to the touch. The little things stick out, too. The navigation buttons are simple and accessible, which make the information and media menus that we’re used to a breeze to navigate. Even the turn signal lever feels solid, not flaky like some cars.

The back roads were a bit crowded that morning, so we didn’t have a chance to put it in Sport mode, but Carl reminisced back to his time with the car in Las Vegas and he assures us he was blown away. During their training, the sales representatives from all over the country got to take the MKC on a real driving course, complete with slaloms and sharp corners. We were a bit envious of his experience, but the highlight of ours was rapidly approaching as we turned onto the acceleration ramp for the beltline.

There were two cars in front of us, one of them a Mustang. We held back on the throttle, putting distance between us and them. Once the Mustang had merged and was already in the left lane, we smoked them. Just like that.

It’s almost a shame that we passed them so fast because they probably couldn’t even see what we were driving to appreciate the significance. The MKC will absolutely fly with the slightest provocation. Too soon we arrived at the exit where we usually turn around and head back to the dealership, but as we approached Carl waved us off and said “Just do what you want.” So we kept going.

As aggressive as it can be, when you’re on the highway in the MKC, it feels like gliding. The exhaust note is present when you accelerate, but it fades out once you’re up to cruising altitude. That’s Lincoln’s active noise control at work. We kept up the banter with Carl for most of the drive, talking about car colors and customers and competitors, but during natural breaks in the conversation, it was like we were the only two people on the road. The normally noisy beltline was reduced to a serene calm. When you drive the MKC, the road belongs to you.

It wasn’t until we passed the airport that we pressed the voice command button on the steering wheel and requested directions back to Leith Lincoln. At that point, our talk with Carl shifted to the future of the brand, which we’re both very excited about, particularly with regard to this car. 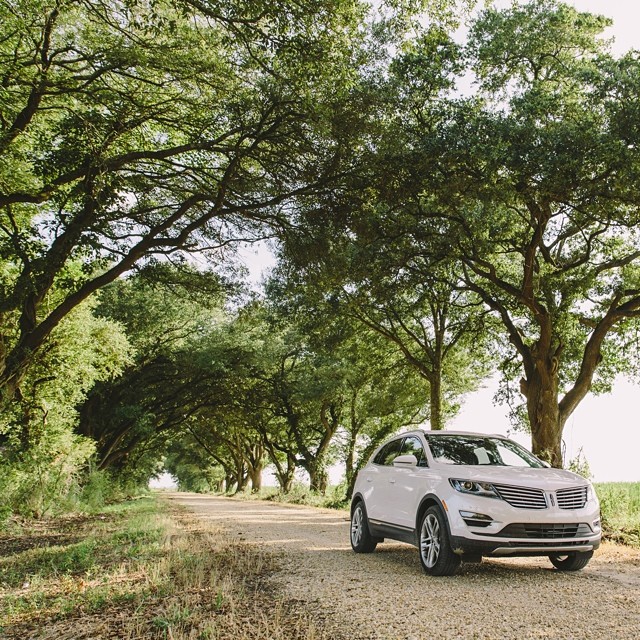 Carl told me about a promotion that Lincoln is doing with the MKC which many of you might remember from the launch of the MKZ last year. The Lincoln Date Night program is continuing. Clients can test-drive the MKC for up to 48 hours – a weekend – and show the car to family, friends, people you work with, people you go to church with, and random passersby who want to know what you’re driving. On top of that, Leith Lincoln will give you a $100 gift card so that you can treat yourself to dinner. They’ll even help you make a reservation at the restaurant of your choice. Oh, and we can also tell you that the Date Night car will be sporting the Midnight Sapphire livery, so wherever you go, you’ll be catching eyes.

All of this is so you can get to know the MKC better and experience what real luxury feels like. There are no obligations other than you enjoy yourself. If your Date Night test-drive is anything like ours, then we think that’s guaranteed.

As always, we want to thank Carl Banks for making our time in the 2015 Lincoln MKC more than a test-drive. When you do business with Carl, you’re getting an experience. Thanks of course to Leith Lincoln as well. Visit the website if you want to schedule a test-drive in the all-new MKC, and if you’re interested in Date Night program, get in touch with us at the dealership.

Behind the Wheel of the 2015 Lincoln MKC was last modified: December 18th, 2015 by Leith Lincoln